The axing of a park and ride service in Reading has sparked a clash over the route’s failure.

The Reading Buses 400 route, which runs between Thames Valley Park in Earley and Reading town centre will finish on Saturday, June 18.

Reading Buses has axed it due to ‘very low usage’.

The suspension of the service has led to a clash among Wokingham Borough councillors about the failure of the route and the future of a park and ride on the site.

The service was introduced in November 2021 when the park and ride was ‘moved’ from Winnersh Triangle to Thames Valley Park while the former site undergoes an upgrade.

Wokingham Borough Council’s previous Conservative administration chose to subsidise the route for a number of months.

The Liberal Democrats have since taken control of the council in a coalition.

Councillor Pauline Jorgensen (Conservative, Hillside) Wokingham Borough’s former executive Member for transport, said: “The bus service was run commercially by Reading Buses when it was run from Winnersh Triangle, and during the pandemic it was subsidised by the Government’s bus support grant.

“When the grant came to an end as COVID-19 subsided, the previous Conservative administration provided bridging funding to allow time for passengers to return to travelling on buses.

“Despite the bridging funding, use remains low and ultimately, the decision for running the service is with Reading Buses, wholly-owned by Labour-run Reading Borough Council.

“It is up to the new Lib Dem-led coalition in charge of Wokingham Borough Council to decide if it wants to continue subsidising the service.”

Wokingham Borough Council’s new executive member for transport expressed hopes the service from Thames Valley Park can be re-introduced in the future.

“Once construction is finished, we hope a commercial bus service will be re-instated. We will be speaking to Reading Buses nearer the time but are committed to seeing a bus service being operated from Winnersh Triangle. The Park and Ride service was popular and well used prior to the pandemic, which allowed Reading Buses to run the service commercially without costing them or the council any money.

“Unfortunately, although we have worked with Reading Buses to try to keep the service running, there is a very low demand compared to pre-pandemic levels – it is currently at about 16% of pre-pandemic demand.  This means that the cost of providing a bus service far exceeds the income.

“The council financially supported the service hoping that ridership would increase. As it hasn’t, the council is not able to fully fund the service and Reading Buses has decided to stop the service.” 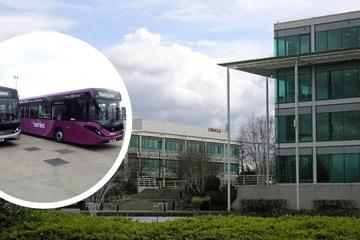