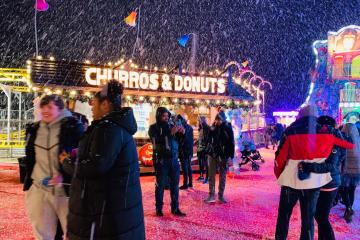 A decision has been made on whether Reading Winter Wonderland can go ahead this year.

The popular event has been running for years in Forbury Gardens, but was cancelled in 2020 due to coronavirus and moved to Hills Meadow car park in Caversham in 2021.

Now, councillors have allowed it to take place not just for this year, but the next six years.

That’s because event organiser Billy Williams applied for a licence for Winter Wonderland to run 54 days a year until 2028.

The decision was made at a Reading Borough Council licensing committee hearing this morning (Thursday, September 22).

“We have got some really wonderful comments. It’s very much a family orientated event.

“It’s important to bring business to the area, and breathe life into the area, provided it is appropriately managed.”

Ms Dowling added it was important to keep people to coming as similar events are planned in Newbury and Bracknell.

READ MORE: Plan for what Reading Winter Wonderland will look like this year submitted

However, there were concerns about noise disturbance coming from the site after two people sent multiple complaints.

One of the complainants, Clare Smith, manages Kingfisher Place which contains 38 apartments, with other complaints coming from a man living in Cardinal Close.

The council’s senior environmental health officer Rebecca Moon suggested that the organisers should submit a noise management plan 28 days before opening to lay out how disturbance will be managed.

Officer Moon said:  “54 days for the next six years is a lot. The applicant did respond to complaints, but we did continue to receive complaints after that.”

Complaints were submitted to the council. One one occasion, there was confusion over whether noise disturbance was coming from Winter Wonderland or the ‘Best Party Ever’ event in King’s Meadow.

Officer Moon said she could not say for certain which event triggered the complaint on that occasion, but said ‘on the balance of probability’ noise at that time came from people enjoying amusement ride at Winter Wonderland.

In 2021, staff of Winter Wonderland regularly monitored sound levels, with Ms Dowling argued the organisers had gone ‘above and beyond’ to make sure noise levels were tracked.

Officer Moon asked for an independent acoustic professional to be hired to provide further sound monitoring.

Ms Dowling argued hiring such a professional would be “onerous” for the event, which is free to enter.

Officer Moon also said that noise produced should be no greater than 62 decibels (db), rather than the 63db that Mr Williams agreed to.

Furthermore, she asked that letters containing information and contact details for the event be delivered to Kingfisher Place and Cardinal Close, which Ms Dowling at one point called an “archaic” form of communication.

Mr Williams said that his mobile number is publicly available on the Winter Wonderland Facebook page so that any complaints can be managed.

Ultimately, the licence was granted on the condition that a noise management plan is submitted 28 days before the event and letters are sent to Kingfisher Place and Cardinal Close.

Officer Moon’s requests for an acoustic professional and reduction to 62db were not included as conditions.

It means the event will run from November 12 to January 2, 2022, opening at 11am, with recorded music and alcohol for sale until 10pm, with Winter Wonderland closing at 10.30pm each night.

Cllr Edwards praised the event for being a well managed attraction.

Reacting to the news, Mr Williams said: “It’s a good result, it means that we can plan for the future.

“Cllr Edwards spoke about how we have a good reputation in the town, which is nice to hear from someone else. ”

Work will begin at Hills Meadow on Sunday, October 16.