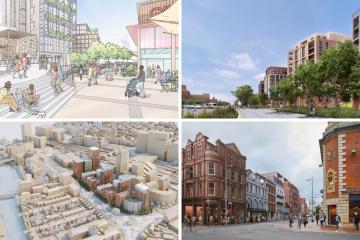 Hundreds of apartments and hotel rooms could be on their way to Reading in 2023 as the biggest developers in the town prepare to submit plans.

This article will specifically look at developments around the town centre, which is set for major changes.

If developers get the go ahead, two of Reading’s retail parks could be transformed into places to live.

A corner of the town centre is set for major change as well, as landowners have secured approval to build a hotel and create a new character area.

Where plans have been submitted or approved, you can see the application references in brackets, which can then be found on Reading Borough Council’s planning portal.

The initial proposal involves getting rid of the row of shops from Home Sense to Natuzzi Italia and building approximately 11 residential towers.

The prospective plan, dubbed Kings Meadow View, was unveiled in February, with a spokesperson for abrdn proudly declaring that half of the site would be set aside for ‘landscaped green spaces’.

No planning application for abrdn’s concept has been submitted yet.

An indicative CGI of the residential towers for the Vastern Court redevelopment in Reading town centre. Credit: Collado Collins Architects

It would mean The Range, Majestic Wine, Aldi, One Below and TGI Fridays would have to move.

In this case, a plan has been submitted, but will be decided by the Government’s planning inspectorate after Aviva Life & Pensions appealed against Reading Borough Council’s ‘non determination’ of its application.

At a meeting in February the council’s planning committee agreed that they would have refused it.

The planning inspectorate has still not decided whether to approve or refuse the plan.

You can view any update by typing reference APP/E0345/W/21/3289748 into the planning inspectorate website.

A CGI of people enjoying themselves on the river at The Oracle for the east side development. Credit: Hammerson

In July, Hammerson, the owners of The Oracle, unveiled a prospective transformation of the eastern portion of the centre.

If the plan goes ahead, it would involve demolishing the Vue Cinema building on the south bank, and the partial demolition of the former Debenhams unit.

Six restaurants that are currently open would have to vacate.

The part of The Oracle which would be transformed as part of the east side redevelopment. Credit: Hammerson

The old buildings would be replaced with large towers that would contain a total of 475 apartments, a new cinema, fresh space for retailers and restaurants, and flexible co-working space.

No official application has been submitted yet.

This is one development that will change this corner of the town centre as plans were approved and landowners Thackeray Estates appear to be serious about enacting them.

The plan is in two parts, codenamed QVS1+ and QVS2.

QVS1+ sees the junction of Queen Victoria Street and Friar Street transformed with a new courtyard shopping area at ground level, and 104 apart-hotel rooms above ground.

READ MORE: The four huge Reading developments that will change the face of Friar Street

Approval for both schemes was given at Reading Borough Council’s planning committee meeting on December 7.

According to Thackeray Estates, QVS1+ will take approximately 14-15 months to build, with QVS2 being constructed in about 18 months.